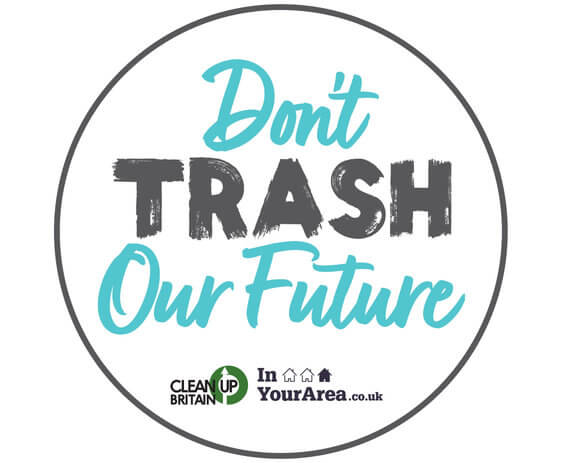 Clean Up Britain has joined forces with In Your Area, the UK’s leading local news, information and community platform,  and JLS singer and farmer JB Gill to launch “Don’t Trash Our Future”, a campaign to deliver genuine behavioural change around littering.

The first part of the campaign involves urging the government to increase littering fines in the UK to £1000, or 100 hours community litter picking and, also to make it compulsory for every local authority in Britain to enforce the law.

While critics may argue the increased fine and community service terms are drastic, there is already a £1,000 fine for owners allowing a dog to ‘litter’ in public space, and not clean it up.  In addition, and to compare, there is a $1,000 fine for littering in California;  $2,200 Australian dollars in New South Wales and a whopping $10,000 in Massachusetts.

Increased littering has been an unwelcome feature of the coronavirus pandemic.  Streets are soiled, bins are overflowing and parks are left strewn with bottles and wrappers.  Laws exist to keep the country clean, but they are either flouted or not enforced on a massive scale – as recent scenes at beauty spots across the UK only serve to prove – so more drastic action is needed to change the behaviour of the public and local councils.

A Freedom of Information request sent by Clean Up Britain to 169 councils in England and Wales found the majority (56%) were issuing less than one fine per week for littering and more than two dozen (16%) don’t issue fines at all*.

A new survey commissioned by In Your Area with more than 7500 respondents reveals:

Commenting on his support for Don’t Trash Our Future JB Gill said:

“It’s great to see that people recognise that litter is a public health concern and a major problem. The only way to stop the damage being done to our health, nature and wildlife is to sign the Don’t Trash our Future petition, object to local councils not enforcing fines and demand a higher penalty for those dropping litter.”

It is hoped that the increased fine and pressure from members of the public on local councils to enforce it will result in a dramatic shift in attitude towards litter and waste.  Commenting on the matter Merle Van Der Akker, President of the Behavioural Insights Team at Warwick Business School said:

“It is not about the absolute value of the fine, it’s about the message it sends. This level of fine tells you that this behaviour is deemed costly, and quite frankly unacceptable. Sometimes it does take drastic measures to get this message across.  From a behavioural science perspective, presenting people with such a message triggers a response of shock, because of the sheer size of the fine.  People then reason that if the fine is so big, the issue at hand must be of great importance or urgency.  This is how you get people to pay attention and take action. No one wants to be fined £1000 for throwing away a £1 can of drink.”

“Fines need to be increased to a level which shows the Government – and society generally – will no longer tolerate this antisocial and selfish behaviour.  In addition, we also need to ensure fines are a credible deterrent, by making it compulsory for councils to enforce the law, which currently it’s not.”

Commenting on Don’t Trash Our Future Ed Walker, Editor-in-Chief for In Your Area said:

“In Your Area are proud to be working with JB Gill and Clean Up Britain to tackle the country’s litter and waste epidemic.  Our users are sick of seeing their neighbourhoods being treated like rubbish dumps.  Don’t Trash Our Future will hopefully make councils and members of the public think harder about the littering issue.”