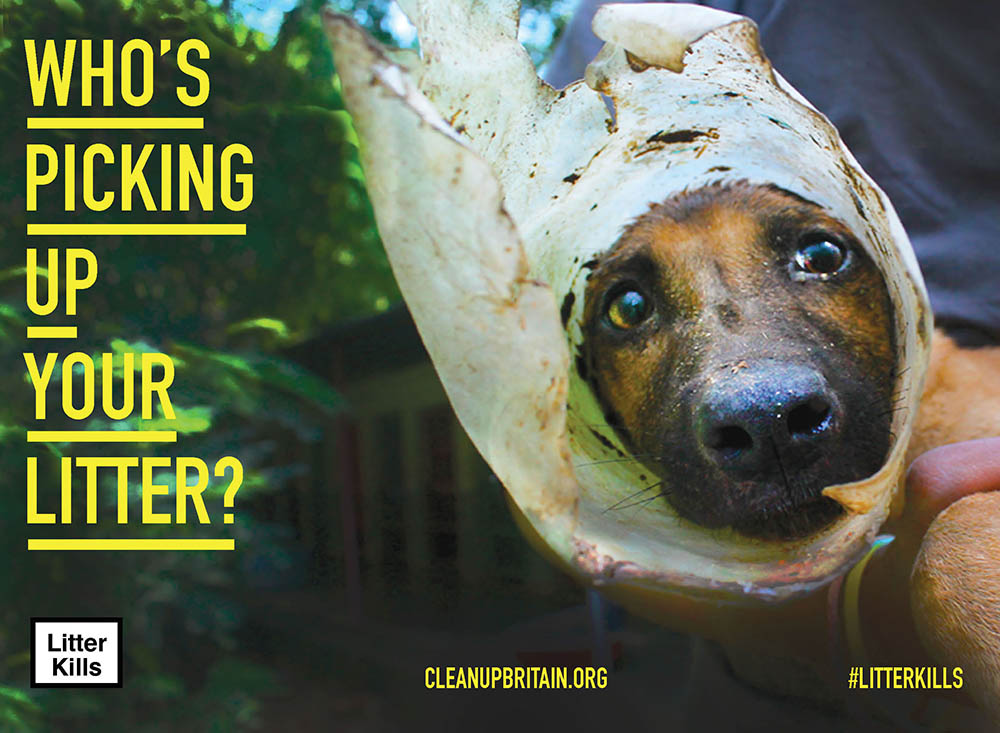 The UK has a serious litter problem. Take a look around you – every village, town, city, beach and roadside is blighted with the lazy leftovers of our daily lives.

We’ve been wrestling hard with how to properly ignite the conversation about litter and the damage it does.

In particular, we need to get to young women and men, age 16-30, who don’t even think about litter. This age group, while outwardly professing a love of the planet, recycling and other green issues, over-indexes on littering compared to other age groups.

Its been ages since a national anti-litter campaign ran which changed littering behaviours, the topic of littering gets no airtime with this audience, and any wider efforts to prompt thinking and behaviour change has been largely ineffective.

Litter doesn’t really figure on their radar. Yet.

We had seen the RSPCA stats – they get 5000 calls a year about animals injured by litter. Instinctively, we knew that this must be the tip of the iceberg.

We also knew, from previous research, that talking about hurt and dead animals was one of the only ways to ignite the conversation about litter with our target audience.

And so we began looking hard at the impacts of litter on animals, and with help of  the RSPCA, the British Veterinary Association and the pet charity, Blue Cross, we built the bigger, shocking picture. Our campaign ‘Litter Kills’ was born.

We know that the images are shocking – that’s the point. We need to give people a reason to react strongly to seeing others litter, and make those who do think twice. We have to shift attitudes and behaviour.

We’re supposedly a nation of pet and animal lovers. British households in total host 8.5m dogs and 8m cats. Millions of us care about wildlife and enjoy seeing wild animals where we live, work and play.

Yet our littering habit affects thousands and thousands of animals in a very bad, sometimes fatal, way.

The images we have used are real.  In fact, there are countless more we could have chosen from.

If these aren’t enough to convince you, here are just a few real life case studies from our partners:

”One 17 year old poodle was admitted with a bone from a discarded takeaway lodged in its oesophagus. It needed a general anaesthetic and an endoscopy to remove it. If the owner hadn’t seen it happen and brought the dog straight to us then we might not have been able to save it”

“Chewing gum and other food products containing sweeteners or mouldy food is toxic to pets. There has been a recent case of a dog admitted after eating chewing gum and being poisoned.”

“Littering can be a definite problem for pets, and vets frequently see its unfortunate impact on animals in the form of cuts to paw pads from broken glass or metal cans and illness from scavenging discarded food, included cooked bones. Pets can also fall sick from eating food wrappers or other packaging that has been carelessly thrown away.”

And from the RSPCA:

“A recent case involved a duck with a plastic ring trapped in his bill and around the back of his head. It must have been extremely painful. Unfortunately we had to put it to sleep at the scene to prevent further suffering.

It’s really shocking and sad to see wildlife suffer in this way, when it could have been easily preventable. This is why we always ask people to please dispose of their rubbish responsibly.”

So there can be no doubt.

Litter Kills has been launched as part of our groundbreaking ‘Now or Never’ campaign which has just kicked off in Leamington Spa.