Home > Ever wondered why there is so much litter on the roads? Part 1…

This is going to be part of a short series of blog posts where we try and give the general public an idea of why there is so much litter along the UK’s roads and also start helping people to take action.

We say ‘start helping people to take action’ because, unfortunately, responsibility for litter clearance can be annoyingly complicated. This post is a summary of the simple part.

Anyway – you may have noticed that the UK’s road network is often heavily littered with everything from large debris to road signs to cans, bottles and other packaging. It makes for pretty depressing viewing.

But what can you do as a member of the general public? Who do you go to? Who is accountable?

The simple part to this answer is that the motorways are managed by Highways England. So if you want to report a particularly littered motorway stretch, you can email them on info@highwaysengland.co.uk

Keep your email short and to-the-point, be specific about where the litter is and ask them to clear it away. If you don’t get a reply or see any action taken, email again. If you want to let us know how you get on and if you get any response, please do – we like to hear real-life stories and may share them on this blog. We can be contacted on info@cleanupbritain.org or on Twitter @cleanupbritain

We now get to the next (and more problematic) part – the A-roads. These are often the most heavily littered for reasons that will become clear.

So – Highways England are responsible for some of the A-roads; the map below is the only information Highways England release to clarify which roads/stretches of roads those are. You’ll notice there is no detail about which specific junctions are covered by them – we are working to get more detail on this as well as getting a higher resolution image. Anyway you can, in theory, simply do the same as above to report litter on these roads/stretches of roads. 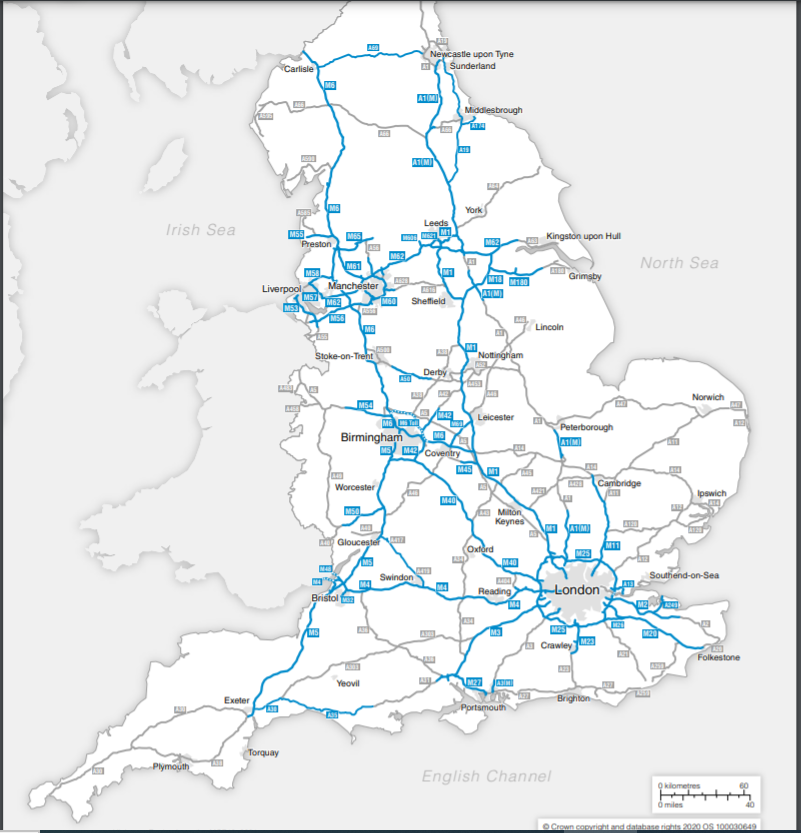 However, the rest of the A-road network is managed by local borough and district councils, meaning some A-roads may go through 6 or 7 of these. There are frequently no signs showing which council is responsible for which stretch, no obvious way to report litter and there is the complication that the councils don’t have the power to close roads to litter-pick – something which is often used as a reason not to litter-pick. It is also often not clear who looks after roundabouts, slip roads and connecting roads.

We will be providing more detail on this as well as some suggestions about what to do about it in our next post.

In the meantime, at least you know who to approach about the motorways…